''Dr. Peter C. Nowell (M'52), Professor of Pathology and Laboratory Medicine, has spent his entire professional career at the University of Pennsylvania, earning his M.D. form the School of Medicine in 1952 and beginning his faculty career at Penn in 1956. For over 40 years, he has contributed to the well-being of the Medical Center and Health System, the University, and the community, and his constant efforts and extraordinary commitment have enhanced science and medicine with local, national, and international impact.

Dr. Nowell has made many significant contributions to science through his long and distinguished career, most notably in his discovery of the "Philadelphia Chromosome," the first human gene linked to cancer.

As a result of his distinguished career, Dr. Nowell has been selected to receive the 1998 Albert Lasker Award for Clinical Medical Research from the Albert and Mary Lasker Foundation. The Lasker Awards, chosen by a jury of the world's top scientists, are the nation's most prestigious honor for medical research and represent the highest possible recognition for a career of exceptional work--they are, indeed, considered "America's Nobels."

Resolved, that the Members of the University of Pennsylvania Health System Trustee Board Executive Committee, together with the University of Pennsylvania Board of Trustees, on behalf of themselves, and the entire Medical Center, Health System, and University, express to Dr. Peter C. Nowell their utmost congratulations and their admiration for all of his outstanding efforts in advancing scientific inquiry in the interests of society''

Extract of Almanac, publication of University of Pennsylvania ​

Discovery of the Philadelphia chromosome: a personal perspective
August 2007, The Journal of Clinical Investigation

The legacy of the Philadelphia chromosome
August 1, 2007, The Journal of Clinical Investigation

The Legacy of the Philadelphia Chromosome: From Discovery to Therapy: A Symposium in Honor of Peter C. Nowell, MD
September 15,2006, Oncolink 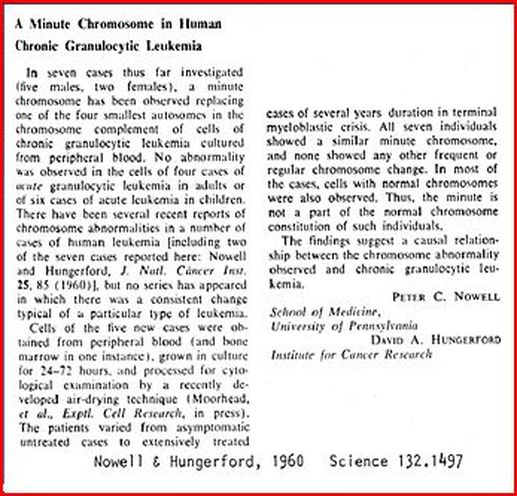 Historical picture of
Peter C. Nowell  and David A. Hungerford 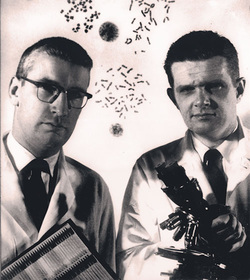